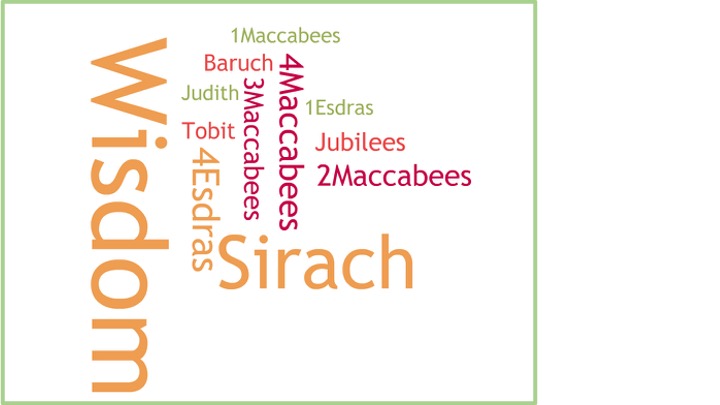 Postings on the Books of the Apocrypha -- Summer 2020

Below, Al Zimmer provides background information on the Apocrypha in weekly installments.

Are the books of the Apocrypha scripture? For some yes, and others no. The word apocrypha is Greek meaning "hidden or secret." Those who do not accept these books as canon call them Apocrypha. But those who accept them call them the Deuterocanon books, "belonging to the second canon."

What is in the Apocrypha? 1 & 2 Esdras. Tobit. Judith. Additions to Esther. Wisdom of Solomon. Baruch. Wisdom of Sirach (or Ecclesiasticus). Letter of Jeremiah. Additions to Daniel, including the story of Susanna. Prayer of Manasseh. 1 & 2 Maccabees.
In his 1534 German translation of the Bible, Martin Luther included seven books in an 'Apocrypha' section, books then accepted by the Catholic Church as part of the Old Testament. Luther said the Apocrypha “are not held equal to the Sacred Scriptures and yet are useful and good for reading.”
After the late 1600s, essentially all Protestant bibles excluded the Apocrypha. Roman Catholics include all but three books of the Apocrypha in their Old Testament.

I do not digress here, but add that some scholars consider the Dead Sea Scrolls as part of literature between the Old and New Testaments. Discovered in 1947 in a cave, The Dead Sea Scrolls have been studied by many with various interpretations.

We will look at the Dead Sea scrolls, when we look at what the Apocrypha tells us about Jesus between his being in the Temple at age 13 and the starting of his ministry at age 31. And we will look at the latest updates from Hershel Shanks, who has written several books on the scrolls, and was responsible for making them available to the public.

During the 100s and 200s AD, Christians began to evaluate and list Christian writings for the purposes of research, teaching and worship. A consensus began to emerge about certain texts—the four Gospels, Acts, the letters of Paul—but real clarity did not come until 367 AD when Bishop Athanasius of Alexandria devised his list of 27 works of the New Testament. This was the first definite listing of accepted books of the Bible.

The Apocrypha books represent several types of writing. There are pieces of outright fiction based loosely on Jewish history, legends, and ancient folktale, wisdom books and historical works that are particularly useful in presenting a picture of Jewish life in Judah in the years leading up to the birth of Jesus. An example is the book of Tobit.

Tobit, a Jew, was a God-fearing man who has gone blind (a fragment of this book can be found in the Dead Sea Scrolls in Hebrew). The archangel Raphael pays him a visit. A magical fish restores his eyesight. A girl named Sara has had seven husbands, all dying on their wedding night, and his son Tobias, being rewarded, will become number eight. The story was to show that God will reward you if you are faithful.

By this time, you should have some thoughts about these books, in some cases just letters, that were written between the Old Testament and the New One. I would love to have a discussion on how these writings affect you.
Some of these books were more popular than others and were in the Latin Vulgate, the so-called “pseudepigrapha” (i.e., the books issued under the name of an ancient writer).  I have often thought about how it was decided to separate these books from biblical ones. Some of the answer lies in the inaccuracies of dates and events, some in how poorly they are written.
The next book in the Catholic bible after Tobit is Judith. Judith is an example of inaccurate history written about 150 BC during the oppressive rule of Antiochus Epiphanes. The story goes, Nebuchadnezzar king of Assyrians (actually he was Chaldean) sent his general Holofernes to conquer the Jews. Judith, a very handsome widow, gets all decked out and goes to the general’s camp. She seduces him and tells him she will help him defeat her people. One night, she gets him drunk and cuts off his head with his own sword. She goes home and arouses the Jews. They attack and defeat Nebuchadnezzar. The Catholic bible has this story; it is not in the Hebrew version. And this story is not in the Protestant bibles. It does nothing to help us understand anything about living conditions and history.

My email address is alvin.zimmer@frontier.com. Please let me know your thoughts.

Before we go any further, let us see what was going on during the Apocrypha years. It can be complicated with all the Kings names and places, and it becomes hard to visualize.

Solomon dies around 977 BC. The kingdoms that followed were weakened by idolatry and small wars. The northern kingdom of Israel fell in 738 BC to the Assyrians. Sometime later, the Babylonians overpowered the Assyrians. These conquests by other countries and kings and generals go on until Persia, in 430 BC, becomes a world power. For the next 200 years, not much is known about Jewish history.

The Greek period followed with the rise in power and influence by Greeks and Pericles, and the conquest of Israel by Alexander the Great in 332 BC. Alexander treated the Jews with great consideration. He spared Jerusalem and the Jews, and Jews came to Alexandria. Greek culture spread amongst the Jews. The Greeks translated the Old Testament from Hebrew to Septuagint. Alexander died in 323 BC, and his empire was divided among four generals.

The Jews under the Kings of Egypt were peaceful and happy. Further wars and conquests brought the Jews under a ruler who wanted to eliminate all Jews. He defiled the synagogues, sent them into slavery, and in general made their lives miserable. Then came the great revolt by the Maccabees.
So, from 167 BC, when the Maccabean brothers recaptured their land, to 63 BC, the Jewish state was at peace. Rome captured Palestine in 63 BC and that brings us up to the time of Jesus.

The Old Testament Apocrypha, although not included as divine canon, do give us some clues as to the thought during the first centuries of the Christian Movement. Christian writers produced lots of texts. These writing came in many different genres. The first Christian writings were letters, letters that Paul wrote in the 50s after Jesus’s crucifixion. The letters he wrote to the new Christian congregations in cities like Corinth, Thessalonica, Philippi, and Rome.

According to Professor David Brakke (The Apocryphal Jesus), during the next decades, more Christian letters followed from leaders like Clement of Rome and Ignatius of Antioch. They became so popular that forged letters appeared, some in the name of Peter, Paul, and James. He goes on to say that around 70 AD an anonymous Christian produced the first Gospel, the Gospel of Mark.

Based on reader feedback, a future class will focus on the Dead Sea Scrolls (see August 2 posting). It will begin the second Sunday after we return to worship, and be conducted in five sessions, Stay tuned for more information about time and location.